A total of 5 trillion won (US$4.4 billion) will be spent to nurture eight critical sectors, such as autonomous driving and smart factories, with focus placed on blockchain, big data and artificial intelligence.

The earmarked budget for next year represents a sharp 65 percent increase from this year’s estimate, according to the ministry.

During an economy-related ministers meeting in Seoul, Finance Minister Kim Dong-yeon said the government will jack up investment in the sectors to up to 10 trillion won over the next five years.

“Up to 10 trillion won will be invested in such sectors as Big Data, AI and other key leading segments,” Kim said.

The finance ministry said it will draw up a long-term road map to nurture such industries. 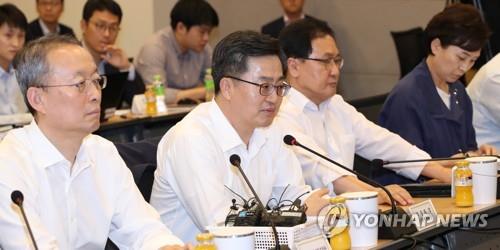 “The measures will help facilitate the platform economy, which in turn will help speed up innovative growth,” the ministry said.

Earlier, the ministry said state-led companies plan to spend over 30 trillion won in the eight leading sectors such as bio business by 2022, which could draw in private companies to invest and build up those areas going forward.

Separately, the government will spend 60 billion won in nurturing a total of 10,000 specialists for such promising sectors over the next five years, it added.

Innovative growth is one of the key economic goals sought after by the Moon Jae-in government, along with income-led growth.

The government earlier unveiled a set of support measures to boost innovative growth by providing funding and other incentives to eight key sectors such as smart farms, smart cities, fintech, drones and electric vehicles and artificial intelligence.

Seoul said it will also take drastic measures to ease regulations that have been blocking new industries and technologies from moving forward.

Under the comprehensive plan, the government will focus on expanding the money supply for fledgling enterprises and creating a venture-friendly environment.

The ministry said a total of 300,000 jobs will be newly created by 2022 under the support measures. 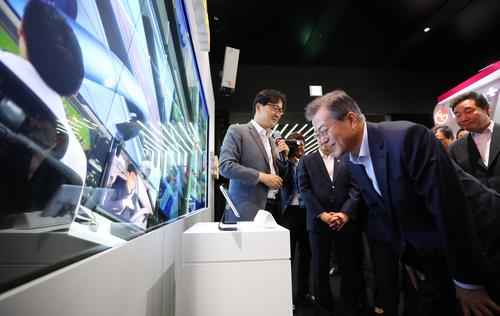 President Moon Jae-in tests a smart media wall using fifth-generation (5G) technology at a research and development complex in Seoul on May 17, 2018. (Yonhap)

Meanwhile, the finance minister said the authorities will take firm measures against potential fallouts stemming from financial woes in Turkey if necessary, although its potential contamination is relatively limited to other emerging countries.

The local stock market sank to a yearly low on Monday, as investors feared the financial meltdown in Turkey could cause a ripple effect throughout the world.

The South Korean currency closed at 1,133.90 won against the U.S. dollar, sharply down 5.00 won from the previous trading session’s close.

The fall came as Turkey’s lira has effectively collapsed since last week, after U.S. President Donald Trump slapped stiff tariffs on Turkish steel apparently in response to Ankara’s decision to extend the detention of Andrew Brunson, an American pastor accused of espionage. This year, the Turkish currency has nosedived more than 40 percent.